This video, from early 2012, is named Oak Park Cemetery Ghost Hunt Revisit. This was another visit to Oak Pak Cemetery, in Claremont, CA. We had Sandra join us this night, she rocked it, as well as Perry, Chris and Lilia, and of course me. We don’t live by there anymore, but it was good to visit the old hood.
In this, Sandra wanted to solo in north part of the cemetery, so we left a camera on her. I kept a close watch on her to ensure nothing untoward happened, but this cost me an unusual sighting. Chris, Lilia, Perry and I were walking away from Sandra’s location towards the south, southwest, and I had turned back to see how she was doing when the other three spotted what appeared to be goblin like dancing small people cavorting through the cemetery at a high rate of speed. All three of them saw this, but I did not. Each gave the same description, but oddly enough each saw a different number of these beings, from 2, 3, and 5. Now this group was founded here, has done this place dozens of times, and never before or since have we seen anything like it. 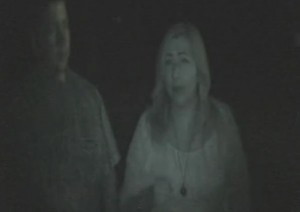 This video was recorded in January 2012, and uploaded to YouTube (YT) and LifeAfterLiving (LAL) on January 23rd, 2012. The YT verion has had 785 views as of the date of this writing, the LAL version has had 3132 views as of late January, 2015. We are using the YT version here now as it reduces lag and bandwidth.