Not exactly a ghost sighting, but a (very) belated report and request for any additional information… 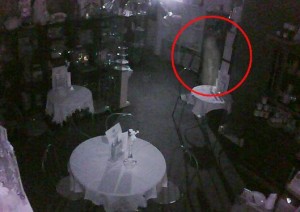 restaurant in San Jacinto, the “La Pinata” on San Jacinto Blvd. (currently “Emillio’s”). They lived for a time in the house on the same lot of the restaurant. Before they moved into the house, they used the house as the restaurant office, “curio shop”, and storage. This was during the 70’s.

The property is very large and deep, with a field that runs fairly far back behind the restaurant from the street and shares a property line with the San Jacinto Valley cemetery (my grandmother and great uncle are buried there). The original restaurant building (remodeled and expanded over the years) and the house are fairly old. I would estimate the structures as being maybe about 100 years old. Also on the property was a very old barn (no longer there).

My uncle had heard stories about the house being haunted, but never paid much attention to the stories. But over the first years of operation, employees, including my cousins who worked in the restaurant as waitresses and cooks reported many re-occurring strange things such as feelings of a presence, sightings and objects being moved about the restaurant. These occurrences happened not only after and before hours, but during busy operation hours of the popular restaurant.

My uncle also reported strong feelings of a “presence” (a hostile feeling), heard unexplained sounds and felt cold temperature drops in the house when he used it as an office and worked late accounting receipts at the end of the night.

While living in the house, one of my cousins had a dream where he was directed to a spot in the old barn. Afterward, he went into the old barn to the location directed in his dream- and found an old dagger wrapped in a cloth in an out-of-the-way nook in the framing of the barn!

All of this is very strange in itself, but the most fascinating story we’ve heard is of ‘The White Lady”. The cemetery next door is very old. As children, we used to cross the cemetery on our way toward the local high school and main street, Florida (Hwy 74) to play or go to a store. I was always interested in the old headstones, some dating into the 1800’s in one corner of the cemetery, a lot of them with humorous saying engraved into the stone. Anyway- neighbors and long time residents had told stories about the ghost of “The White Lady” which would be seen walking/floating from the cemetery into the field, only to disappear when it got to the old barn! My uncle tells the story of, when working late at night in the office, of hearing footsteps in the house and feeling “The Presence” and getting up to investigate the noise. When he looked out the back door, across to the field, he claims to have seen “a white-ish blur” that moved from the cemetery to behind the barn. He thought that it could be a trespasser, and walked toward the barn, but he couldn’t find what he “definitely saw” crossing the property from the cemetery. It wasn’t until he told the story that someone pointed out that his description of how the “trespasser” crossed the property line without stopping, that there is (was) a three-strand barbed wire fence between the two properties- someone crossing over would either have to crawl under or through, or climb over the fence, not walk smoothly through it!

I never witnessed or felt any of this. I used to spend summers there, working as a bus boy at the restaurant and our families are very close- we were there practically every other weekend. But I have heard the stories. The employees talked about their experiences as if it wasn’t any big deal. They simply accepted the “ghost” in the restaurant as part of the job!

It’s been many, many years since my relatives owned the restaurant and lived in Hemet. Since my grandmother and great uncle died, I have no reason to visit the area. I live a little less than an hour away and I sometimes pass through on my way to the local mountains. I know the restaurant is still there, along with the original house. The old barn is gone (it was my relatives who tore it down- it was falling apart). My cousin still has the dagger, and every once in while, when we get together, someone will mention the “ghost stories”.

If anyone has any additional information on this property and the stories around it, I’d love to hear them again! The property is almost exactly 1 mile north of Florida Ave on San Jacinto Blvd, on the west side of the street. Google maps says the restaurant is now called “Emillio’s”.