This is the video Berdoo Camp Minisode 2 Shooting, which took place in March of 2011 in the mountains above Palm Springs. It is a miniature episode, thus a minisode. We are firm believers in bearing arms, but also in gun safety, so we went to this location where it is legal to discharge weapons, and part of the video we speak on gun safety common sense. This is video 2 of 3 in this series, the 1st is us four wheeling into this remote location, this one where we do some shooting, and the 3rd where we ghost hunt in this long abandoned (since 1937) water district camp. There is bonus footage not seen in the full episode. 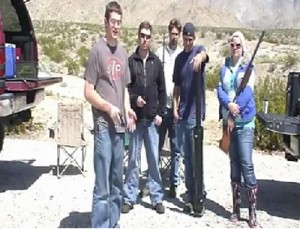 This was shot in March, 2011, and uploaded to YouTube (YT) and LifeAfterLiving (LAL) on May 17th, 2011. The YT version has had 211 views at this writing, the LAL version 1028 views as of January 2015 when we closed the old server. We are using the YT version here now to save bandwidth and speed delivery to you the viewer.