Originally created in 2009, Ghost Evidence 101 for partly to help people not jump to conclusions about finding, including our selves, and also for fun, a laugh. We always took ghost hunting seriously, but you just have to silly things sometimes. See, the thing that looks like a face that pops up in the video at one point freaked us out initially, until we figured out what it really was, a cautionary tale of thinking it through, realizing most “catches” are nothing but illusions and mis-perceptions, and slowing down from jumping to any conclusions. We knew for a fact at that time that a good many people were missing this cautionary point, thus the reason for this video. 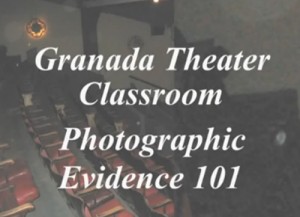 This video was shot at the Granada in October of 2009, uploaded to YouTube (YT) on Nov. 25th, 2009, amassing 2240 views as of this writing, and added to LifeAfterLiving (LAL) April 4th, 2010, hitting 2419 views before the old LAL server went dark. We are using the YT version on LAL as it has better resolution that our saved LAL version. The LAL views counter has begun where the old counter left off, the YT views counter continues unchanged.