We caught a lot of flack on YouTube (YT) on this video, the Oak Park Cemetery Revisit, but none on LifeAfterLiving (LAL), from some folks who felt the video rolls by too fast, an absolutely valid concern, the speed. The video was set to scroll by too quickly, so we have slowed the video down by 1/2 to give people a chance to see what is there.
These are photos that we took at Oak Park cemetery, a genuinely haunted place where Claranormal was born, and which happened to be about a block away from home back then. Quick note, the phantom is one of the weirder phenomena I have ever seen in a picture on scene. I recall Scotty shooting the pictures, the mini van sitting there, I recall a man sitting alone on a park bench on our side of the van, and that he was utterly alone, having visited his deceased relative’s grave. The time stamps show that all three pictures were shot in a burst of under 2 seconds (under 8/10ths of one if I remember right), so the movement of the black figure is not explainable. We were north of the scene shooting south west. The original 3 pictures can be seen at Claranormal.com, as well as below the video.

This was originally uploaded to YT December 1st, 2009, and onto LAL on April 14th, 2010. On YT it has gathered 6187 views at this writing, and on LAL it gathered 2816 before the old server was closed. The view counters pick up where they left off. We are using the YT version on LAL as it has higher resolution than our saved copy. 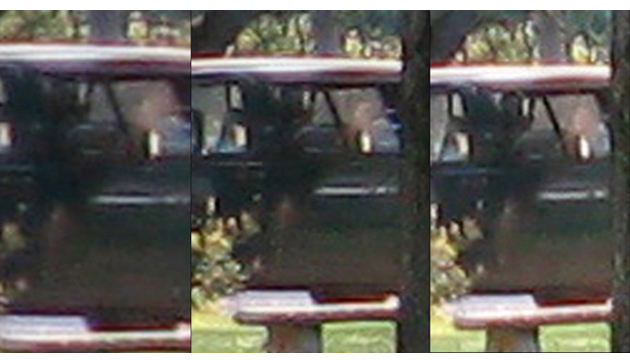