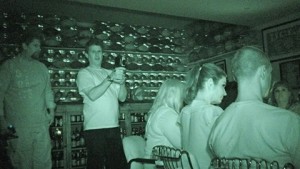 First check availability of the tours at the Facebook page. These happen very infrequently, it is a very exclusive and rare event, so do keep your eyes open!
https://www.facebook.com/OmanHouseTours

What can I tell you about the upcoming tours of the Haunted Oman House, which was recently featured on Ghost Adventures, that you don’t already know without spoiling any of it for you?

Let me start with the folks running it, and allow me to preface it. I have not spoken to any of the principals involved with the tour in writing this, nor advised in anyway of what to say and not to say. In other words, I’m writing that which I know or have experience with.

David, who owns the house, is an affable, intelligent man with a wicked sense of humor, and says exactly what he thinks with no embellishment. When he says “These things happen in my house, and this just happened”, you can take it to the bank.

Now please understand that I write this for a number of reasons, one of which is if tour takers think they’ll go to this house and be disrespectful, then well, I can safely say this is a bad idea.

I have been to this location several times before Ghost Adventures aired the Oman House episode, and amazingly did not know a few things about the paranormal activity within before the airing of the Ghost Adventures episode, but I suspected some things.
For example, the bottom bedroom was somehow special, I knew a guest sleeping there had been disturbed, partially lifted by an unseen force, but according to the show it was a man who was raised fully off the bed and pinned against the right rear wall of the room. It was from this exact direction from which a gravelly voice called me an a$$hole as I walked into this room to retrieve our surveillance cameras after an investigation.

Nobody but me was in the room, in fact nobody was on that entire floor except me, and it gave me a bit of a pause. The night had been relatively quiet, and I looked over my shoulder, kept walking toward the camera, and in response said Oh, sure, now you start talking, after the cameras are off. Too late, you had your chance. No reply back from the gravelly voice male voice.

On a trip to this location a few days ago, team member Lilia, an acquaintance with an amazing ability to connect with the other side, heard my name called in the bathroom that services this same bedroom. A deep gravelly voice, once again. On a side note, the earthen room is directly behind this bathroom.
Also on this lower level we have detected major temperature changes, cold spots appearing out of nowhere, then dissipating, many times in sync with EMF spikes. The biggest changes seem to come from the stairwell shaft, and for the most part I have attributed the temperature change to the fact that it was warm in the house, cold outside, and large picture windows are set into the walls of this shaft looking out into the canyon. However, Ghost Adventures also experienced this temperature change, and they filmed in the summer time. It would have been warmer outside, not cooler, nullifying my theory.

Entering the room on the bottom floor outside the bedroom I have also experienced a sort of resistance, which has, several times, made me stop, not want to enter this room, and from this bottom floor we have also recorded disembodied voices.

On EMF readings, I have used my visits to this house to check for and document EMF hot spots, and by and large this house is, electrically speaking, very clean of stray EMF. I’ll carefully check areas which have no EMF readings, and later, lo and behold, sporadic spikes occur, often seemingly in response to questions.
The earthen room is a good example.
I have painstakingly checked for errant leaking energy (my profession and training as a home inspector helps with this) and found just exactly none in this room. In fact on the very first visit none of us detected any EMF spikes of any kind at all, except in the laundry room area where we had meters sounding off in a fashion not dissimilar to how a heart rate might register on a similarly equipped machine, thub dub, thub dub. However if the washer is running, about a 5′ circle around itis saturated with EMF energy.

The falling figurines.
You may have seen the figurine topple on Ghost Adventures, and I have witnessed the same probably a dozen or more times. We have also had a whole investigation go by where not a single figurine was disturbed in any way.
Here is a link to a video we shot in November, 2013.

When this toppled, Adam Risley and I were in the next room by the bar, we did not see or it hear it topple, but we heard the roar of those downstairs at the video monitor station, “No way! Son of a bitch, it just went!” What you see us doing after the fall is getting temperature readings off of the Beetleguise figurine, checking if it was a different temperature than the ambient air temperature. It was not. The figurine topped 6 or 7 more times that night, once with some of us standing right in front of it.

I can personally attest that there is no trickery involved with the toppling of the figurines. I can also say that the floor is solid as can be. In the Ghost Adventurers episode, David illustrates this by jumping in front of the aquarium, resulting in zero movement. You’re talking about 800 pounds plus of glass, water, fish and wood that these figurines stand on. That furniture is not budging.

What will you experience on your visit? I don’t know, and I wouldn’t say if I did know. All I can say is there’s a very good chance of experiencing something paranormal, and an excellent chance of having a great time.