This video from 2010 is called the Return to Granada Part 3 Backstage, is mostly EVPs. We apologize for the speed at which the EVPs play, super rapid fire. We hadn’t been making videos that long in 2010, and did not have the concept of “let them sink in” down yet.
The trumpet sound, in the 5 years since, we still have not heard from anybody as to what made it.
The theater noises, the theater was empty of people while we were back stage. Who made the noises?
Part 2 is here
Part 1 is here 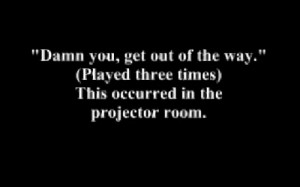 Uploaded July 18t, 2010 to YouTube (YT) and LifeAfterLiving (LAL), we are using gthe YT version for LAL rather than the saved native version due to bandwidth concerns. The YT version had 165 views as of this writing, the LAL version had 1035.