Is This Some Sort of Underwear Party?

Is This Some Sort of Underwear Party? 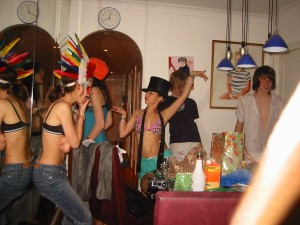 Is this some sort of underwear party? Taken from one of the best commercials of all time, Carl’s Jr with
Hardee’s biscuits, the line denotes the absurd, such as a 19th century southern gentleman appearing on a southern California beach (or any other beach) and seeing folks in modern swimwear. Of course he’d look upon the scene with bemusement and possibly horror (and perhaps lust-fullness being disguised behind the former and latter), because for all intents and purposes, swimsuits are nothing more than underwear worn outdoors. How inappropriate the scene would be to another, past generation.

This same absurdity is largely how I see the paranormal as it too evolves, or de-evolves, into something it never before was, morphing into something it ought not be, commercialized, sexed up, and full of opportunity seekers and God haters.

Don’t misunderstand me, every one has the choice to worship as they wish, and I for one would never push my belief in God onto anybody, I have demonstrated this over and over again, but time and again I hear people complaining that “Oh, Christians are so judgmental, I hate them… blah blah blah…”, all the while passing judgment on them, a completely hypocritical stance and statement.

So I see all these paranormal folks, many of whom are completely God-less, some of whom actively bash on God and his followers, and on the other hand are the Christian folks who think and say that ghost hunting, paranormal investigating is “Of the Devil.” They say “Noooo, those are demons and they are trying to trick you.” It makes me sit back in wonder at the absurdity of it all.

You’re looking for spirits who survived the body and stayed behind. A spirit leaving the body is a cornerstone of religious afterlife, I would think. That some do not move on to their “just reward” would seem logical. Some just don’t go. Yes, there is a small percentage of contacts with unseen entities which are “unclean spirits”, demons, insane spirits, if you will, and being prepared for that eventuality is important on all ghost hunts, but by and large the percentage of demonic contact cases is very small.

The atheists and God haters who hunt ghosts? Ok, so you’re seeking out a person (a personality) who has continued on, managed to live, to survive sans a body, yeah? So if, theoretically, a person survived the body, and you believe it is so, then would not then ALL people survive the body? And if so, they, we, all go somewhere? Yeah? For me that’s Heaven. for others that may be the universe, or back to a “spirit collective,” or whatever you want to call it. The over-riding theme is that people do survive the body and most depart, but some do not. So if it isn’t to far fetched for someone that an invisible spirit is in a room with them, why is it so far fetched that God is an invisible spirit among them?

I’ve been told so many times, and I have lost count, that I should not be doing paranormal investigations so much as I should be trying to free these spirits who stayed behind. Well, I have retired from investigations, not for this reason, nor because I dislike the field, but more because I’m tired of it and what it is fast becoming, a topic for later. The bottom line is this: I have no idea HOW to “free a spirit,” or if such a thing is really possible. And besides, on freeing spirits who stayed behind, isn’t it their choice, their free will to stay or go? Isn’t it that same free will that leaves so many earth bound? Who am I to toy with their free will? More often than not that choice to stay was made out of fear, and I can not allay that fear with my earth experiences, I don’t know their story, their specific wants, needs, fears, and anything I say to convince a spirit to move on to a higher domain would seemingly ring of hallow, false assurances. And yet to not try, to exist with complacency also seems wrong. So I ponder this tar baby, all while watching a field which used to be made up of very smart, scientific minded people, nerds really, become sex charged, money oriented, social events, it strikes me that the paranormal field is astray. Allow me to explain.

We all live, and all of us will die one day. When we “pass away,” many people will cry, miss us, our loved ones and friends. A lost life is a terrible thing, and when you’ve lived long enough, or have seen a lot of death, it strikes you how precious life is, and how fragile life and the dynamics of life and death really are. At nearly every grave site tears have been shed for the loss of a loved one. Real, raw emotions, terrible loss and longing. And these departed are the personalities we try to contact.
So let me ask, isn’t it crass to make DEATH into a profit machine? Into a reason for alcohol fueled conventions? Make the people who undertake the task of communicating with lost loved ones into false celebrities? To worship, for lack of a better word, those who look to make a financial opportunity out of the deaths of other people’s loved ones?

It seems to me respect is largely lost in the paranormal field. It HAS become some sort of underwear party.