Uploaded February 22, 2014, this video is the Oman house tour witnesses floating falling picture. The previous night had been a paranormal tour, and at one point a picture for David’s movie, House at the End of the Drive came off the wall. Now it didn’t simply fall off, but it pushed upwards, then forward, then began falling in slow motion, as if an invisible person were in the room taking the picture off the wall. None of the surveillance cameras were pointed at this, but a whole bunch of people witnessed it. These are their acccounts. 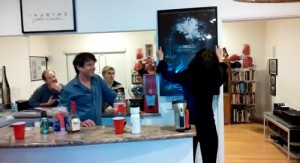 This was uploaded on both YouTube and LifeAfterLiving on February 22nd, 2014. YT has had 323 views, LAL has had 165 views. We are now using the YT version on LAL.