Ovilus Paranormal PX in Action on Our Show

From January, 2011, this video is named Ovilus Paranormal PX in Action on Our Show. We took our Ovilus Paranormal PX into the field to do a live broadcast of Claranormal Talk Radio from a home which had been having visits from a spirit ever since some members had been on a hunt a few days earlier. This is a clip of the PX Ovilus in use from our radio show. Nothing conclusive found. The Ovilus PX has been unused now for about 4 years. Want to buy it? 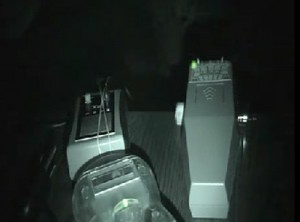 This was uploaded onto YouTube (YT) and LifeAfterLiving on January 24th, 2011. In that time the YT version produced 2389 views as of this writing, the LAL version had 3720 views at the end of January 2015 when we took the server off line to switch to this format. We are using the YT version for the sake of bandwidth.